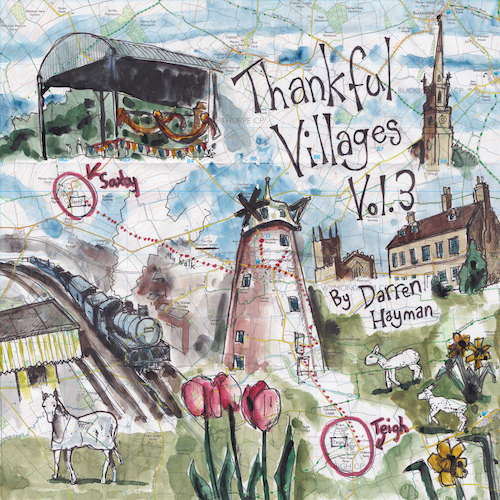 Released on 9 November, to coincide with the hundredth anniversary of the end of the First World War, Thankful Villages Volume 3 is the final instalment of Darren Hayman’s epic study of rural British life.

A ‘Thankful Village’ is one where every soldier returned alive from the Great War. Darren has visited all 54 of these villages and made a sound recording, painting and film in each one.

Thankful Villages doesn’t concern itself exclusively with the War, however. It is an exploration of rural communities, including collected stories, interviews, folk songs, soundscapes, field recordings and new original songs.

The record takes the form of a fantastical radio show as Darren unearths lost human stories from hidden rural idylls.

The first volume of Thankful Villages revolved around a theme of churches, while the second volume focused on rivers. This third chapter concerns itself with the younger generation. In Hunstanworth, County Durham, Darren records a young girl called Ruby reading a poem written by her grandmother in 1974, on the day of that village’s school closing. The school itself is still signposted by the Giant’s Stride, a Victorian playground apparatus that towers above the village and features on the cover of Thankful Villages Volume 3.

Please note that the CD and vinyl editions of the album feature different artwork.